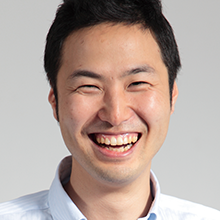 He worked at A. T. Kearney as the management consultant and at Mercedes Benz as the product manager. After launching his own Web services, he co-found Moff Inc in Oct. 2013. In Apr. 2014, their original wearable product, Moff Band, succeeded in its Kickstarter campaign, achieving 4 times the pledge.

He is the father of two daughters.

FamilyTech and the Age of Wearables