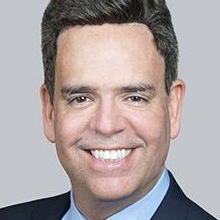 In this role, George works with Co-President Michelle Wilson to lead the organization and execute the company’s strategy.

George played a central role in leading WWE’s transformation to one of the most successful multi-platform media businesses in the world with a leading position in traditional, digital, social and direct-to-consumer media. He co-led the development, launch and operation of WWE Network, the company’s award-winning SVOD service with over 1.5M subscribers (the #2 branded subscription service in the U.S.). In 2017, Institutional Investor ranked George among the top 3 CFOs in the media industry as part of their All-America Executive team rankings. He joined the company in 2008 as its Chief Financial and Strategy Officer and continues as WWE’s principal financial officer.

Prior to 2008, he held several senior financial and general management roles for The New York Times Company, Praxair and Time Warner.