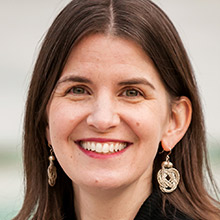 Over the last 18 years, Sara DeWitt has worked at the forefront of new digital platforms, in an effort to be everywhere kids are: from websites and mobiles apps to streaming video, augmented reality, 3D-rendered experiences, and wearable technologies. As VP of PBS KIDS Digital, she oversees the Kidscreen- and Webby-award winning pbskids.org website, PBS KIDS streaming video services, the PBS KIDS portfolio of educational apps for children, and the PBS KIDS for Parents digital experiences. Most recently, Sara led her team through the development of the PBS KIDS 24/7 digital live stream, an integral part of the new PBS KIDS 24/7 services launched in January of 2017. In 2014, she was named one of the top 42 Women Leading in Education by the USC Rossier School of Education and was selected as one of the Top Women in Digital by Cynopsis Media in 2016 and 2017. Most recently, Sara gave a TED talk about the potential media has to positively affect learning.

Before her career in public media, DeWitt worked as a preschool teacher and a management researcher, and studied media habits of children in rural areas of the United States. She holds a BA and an MA in English from Stanford University and holds a certificate from the University’s Children, Society, and Public Policy curriculum. She is also a military spouse who has moved with her husband and two young sons four times in the last five years.

Is Play the Secret Sauce?