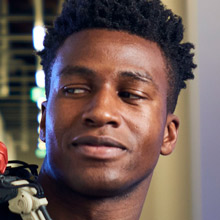 Silas Adekunle was born in Nigeria and moved to the UK at 11 where he pursued his passion for robotics. While studying at the University of the West of England, he first had the idea for MekaMon when teaching in schools and discovering the potential for gaming and robotics to engage children in STEAM. Since its founding in Reach Robotics in 2013, the start-up has gone on to secure $10m in funding and listing of MekaMon on Apple and Amazon across the US and Europe. Silas himself has been named on Forbes “30 Under 30” list for European Technology and in the Financial Times’ Top 100 black and minority ethnic leaders in technology.