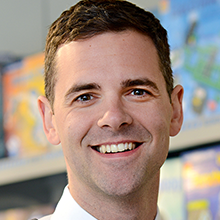 Ted is the President, Cofounder, and head of product development for the educational toy and science kit company, Thames & Kosmos. Ted was lucky enough to grow up in a science museum run by his mom, Jane Holdsworth. She was a passionate advocate for STEM education and the original visionary behind Thames & Kosmos. While in high school, Ted taught the museum’s science summer camps, and he set up and ran the museum’s toy store — his first toy industry experience. After earning his B.S. in Mechanical Engineering/Product Design from Stanford University in 2000, he worked as a user interface designer for Adobe Systems. In 2002, he went back to the museum, and to run Thames & Kosmos — which was at that time a one-year-old partnership between the museum and the 180-year-old German publishing house Kosmos Verlag. Since 2002, Ted has developed and brought-to-market hundreds of award-winning science kits, games, and toys, and grown Thames & Kosmos into one of the leading STEM toy companies.